Wow – so that was Ecuador

Vacation time came around and this year we went to Ecuador. Our trip was with Tropical Birding, the Quito based birding tour company and they were of the highest calibre. The trip was their High Andes to the Amazon tour and we tacked on three days at the end in the west, staying at Tandayapa Bird Lodge just so we did not have to return to the snow early!

This is just a short post, more shots will follow and a little more detail. The basics of the trip were that we birded the Andes around Antisana and at the Papallacta Pass (4000m+), we then moved on to Guango Lodge, then San Isidro. After a few nights we then moved to overnight in a lodge on the Rio Napo before boating downstream to Sacha in the Amazon. To see details of the lodges, just google them. To see the trip itinary Google Tropical Birding, you might want to bookmark it, their tours are very very good.

The raw details of the trip, in terms of birds seen, are: Overall trip list of birds seen (by me), 590. Species heard only, 42. Leader only birds around 10, Sandra saw another 10 species from the canopy walkway at Sacha, I was too windy to walk the suicide bridges but I did get half way up one of the 50m towers and saw a few birds. I also made it up their canopy tower but was put off when a lump of a tourist appeared at the top and I doubted that it would support her and me!

So the whole trip, including our extension yielded in excess of 650 species, an astonishing total for two weeks birding.
I have a fair few pictures and video clips to sort out, below is one of the species everyone who visits the Amazon wants to see, the Hoatzin. This bird eats leaves as its staple diet, if you ever have to share a car with one you might want to keep the windows open! 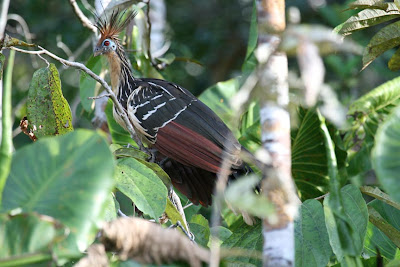