San Isidro is one of those places where you really feel that you would like to spend more time. The lodge is well laid out with nicely situated cabins, a fine common room with a mirador on the roof, good trails and spectacular catering. Our time there was relatively short but a great taster to suggest that the venue would be good for a weeks self guiding sometime in the future.

The trip from Papallacta to San Isidro had packed in a few must see birds, prime amongst these being Torrent Duck. This superb fast river specialist (the clue is in the name) is just great to look at and it has the advantage of not living in a dense tangle claiming a loose association with ants!

The first full day at San Isidro was to comprise a morning on the trails, the afternoon out birding on a road but first we had been promised pre breakfast birds in the shape of the light attracted bounty snafflers. The paths at San Isidro are illuminated at night and the lights have the effect of attracting some pretty hefty night fliers. Moths the size of dinner plates are consumed by the noisy gangs of Subtropical Caciques and Russet-backed Oropendolas. Add to this melange the retiring Highland Motmot and a variety of smaller but equally opportunistic birds and we are talking ten ticks before breakfast.

Our next bit of business, before hitting the trails, was to feed the antpittas. Antpittas are elusive species but they have been found to be ‘trainable’ and will come to take worms provided at regular times. Our first consumer was the lumpy Chestnut-crowned Antpitta, an individual we were to meet pretty frequently over the course of the next few days.

Flash photography is discouraged so the shots below are poor but you do get the idea of what the birds look like. The Chestnut-crowned fed pretty voraciously by the trackside, bins were not required. Nearby a White-bellied Antpitta required a little more vocal persuasion but eventually gambolled up the track like a haemerroid affected pensioner to the shaded clearing and fed circumspectly of the fare provided. Next we checked out the hummer feeders and then off we went into the ‘woods’.

The trick of birding the woods is to find a feeding flock and stay with it, this we did for quite a while and we managed to get onto most of the species Scott called out. Some gave prolonged views, others fleeted by or took some digging out for satisfactory views, it was great fun. At one point we chanced upon a Variegated Bristle-Tyrant, a compact flycatcher which seemed to be quite inquisitive. It soon became apparent that the bird had food and was nesting nearby. Cautious observation revealed the nest to be just above the path and we watched both parents zipping in and out feeding young.

As the day heated up the woods went fairly quiet so we slipped back to the lodge for lunch before climbing aboard the van for a bit of lane birding. The lanes were quite productive and we managed to see quetzals, fruiteaters, many tanagers and, by good fortune, a roaming flock of the nomadic and noisy White-capped Tanager.

After dinner we had scheduled to do some more extensive night birding. Our first evening's stroll back from dinner had resulted in a Rufous-banded Owl being surprised by the spotlight. A little after our group had retired I also managed to see the star bird of the night at San Isidro, the ‘mystery’ owl.

Our second evening’s dinner had a pause between mouthfuls while we all went outside to see the mystery owl perched up in one of its regular spots. Sandra and myself then joined Scott up on nearby Guacamayos Ridge were we had very good spotlight views of Andean Potoo and White-breasted Screech-Owl.

The next day we were due to visit a waterfall but the bridge was out so we did a little exploring, finding some good lower elevation birds. Our good fortune with the weather continued and we were only slowed by a brief shower mid afternoon. Our last afternoon at San Isidro still produced a few birds before we set off the next day to bird Guacamayos Ridge in daylight, then we moved on towards our Amazon destination.

Below a few shots, anyone reading this blog knows I’ll stick anything on it so don’t be too surprised by the quality of some of the shots. 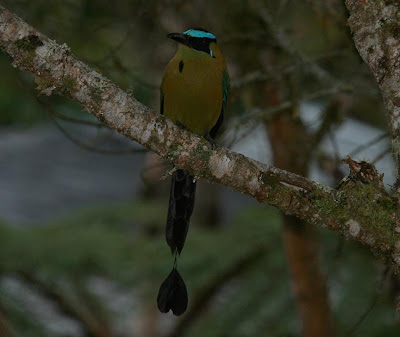 Highland Motmot, an early morning snacker on the mega moths.

The Chestnut-crowned Antpitta. After the hushed excitement at watching this being fed, we saw if frequently hopping around in the cover ignoring us, once, late in the afternoon, we nearly fell over it as it just would not get off the path. 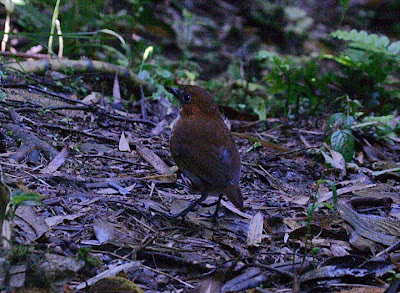 White-bellied Antpitta, it was darker and this bird was shyer hence the dross shot. 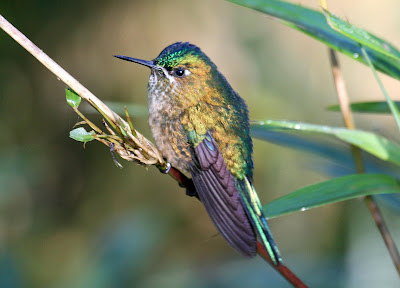 A virtually tail-less Long-tailed Sylph, its colours changed daramatically by the use of flash. 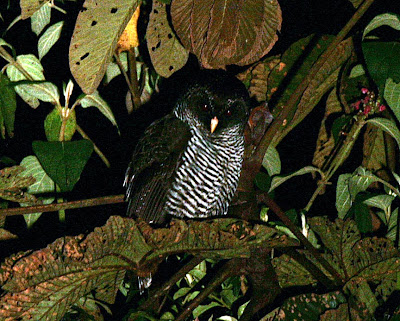 The San Isidro mystery owl. its true identification as most likely a previously undescribed species will soon be established after it was trapped in early 2007 and DNA samples taken. Another lamp hunter attracted by the family sized moths. For more info just Google 'San Isidro mystery owl'. 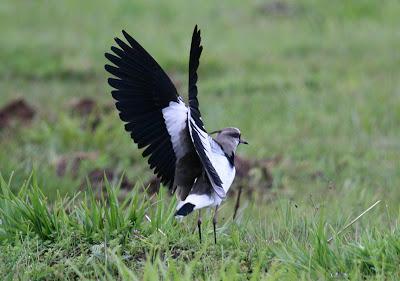 One of very few shorebird types seen on the trip, a small pasture had a few Southern Lapwings posturing to each other. 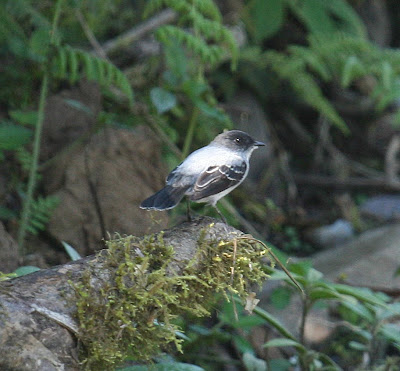 Torrent Tyrannulet, usually seen hopping amongst the rocks in rivers. 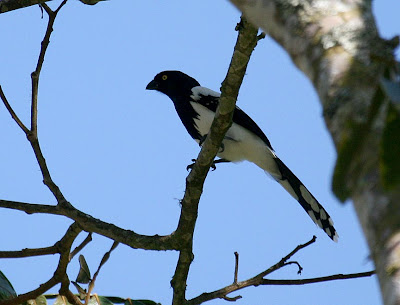 Magpie Tanager. We missed them in Brazil last year (see previous blog) so it was nice to catch up with them, just FYI, they are a tanager species that looks like a Magpie! 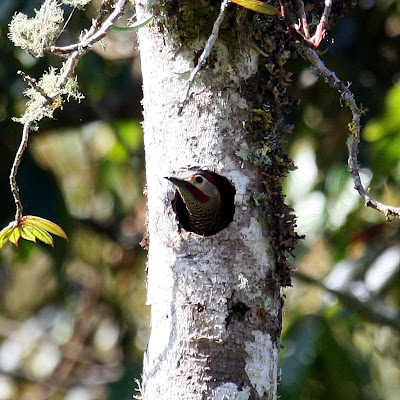 Our aborted waterfall trip led us to explore a nice river valley where we found loads of birds. This female Golden-olive Woodpecker was a local nester. 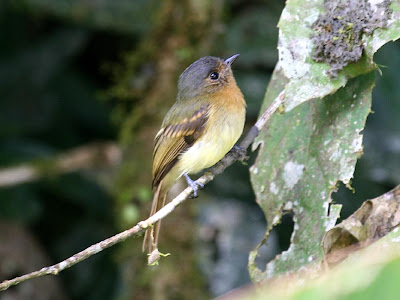 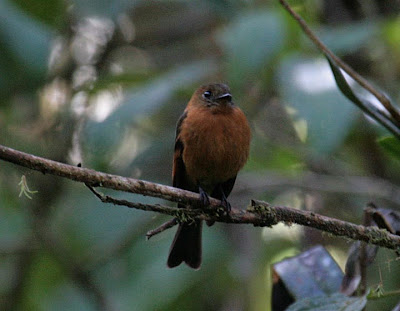 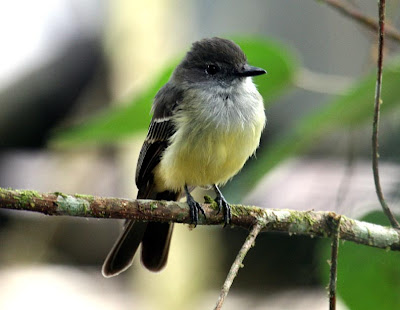 Pale-edged Flycatcher, one of those names that make no real sense as many members of the myiarchus flycatchers manage a pale edge somewhere in their plumage. 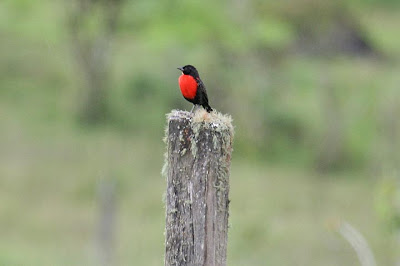 A roadside bird hastily snapped before a good shower, a Red-breasted Blackbird. 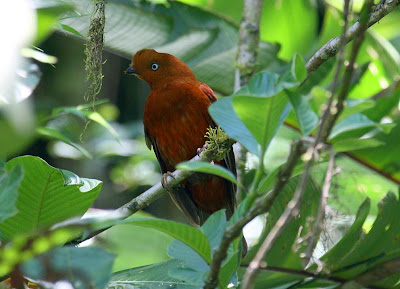 Another Brooke-Bond bird, this female Andean Cock-of-the Rock paused for photos. En-route back to San Isidro a male shot across the road like an orange flash, truly spectacular birds. 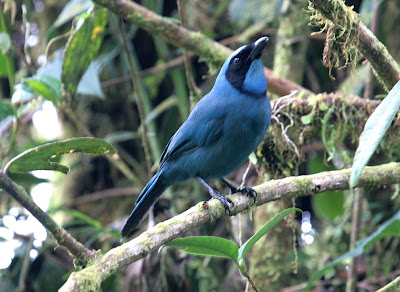 A group of Turquoise Jays were part of a good flock on the Guacamayos Ridge. 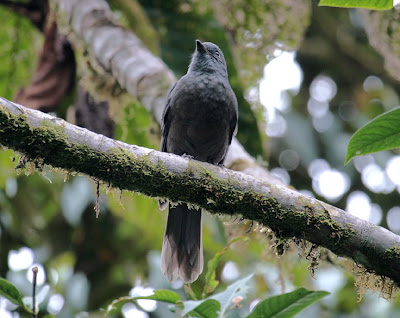 This Dusky Piha was also with the flock. Apparently it is a cotinga but its actions are more reminiscent of a trogon, very deliberate.
Posted by QCdays at 10:57 AM