Sabine’s probably the best gull in the World.

Since the Tadoussac trip things have slowed a fair bit. The L’Anse at Vaudreuil still produces a few shorebirds, six Pectoral Sandpipers on one visit, a Short-billed Dowitcher on another, incidentally my 18 species of shorebird there this autumn.

Warbler migration has been patchy, no obvious arrivals in bulk just a few relatively local species. One early winter arrival has been Dark-eyed Junco, they are in the garden, about six weeks earlier than any previous year since we have been here.

The weekend of 15-16 seemed set to follow the pattern with Saturday damp for most of the morning with the usual stiff breeze. A visit to Pointe Fortune failed to produce much, certainly no hoped for Sabine’s Gull and the back of what seems to have been an arrival in eastern Canada.

Sunday was better and an early morning watch at St-Lazare sand pits had Blue Jays, juncos and Rusty Blackbirds moving plus a few warblers, a bonus was a Barred Owl, new for my patch. Encouraged by this we went to the Lac St-Francois reserve at Dndee but, to be polite, it wasn’t very good. The Egret Trail was overgrown and tough to walk, perhaps one of the site employees could venture from their hut with a tractor or weed whacker sometime.

We toyed with going elsewhere but the day seemed shot. Once home I checked the soccer scores and email and poot, an immature Sabine’s Gull had been at Beauharnois barrage that very morning and we had been but 10km away at one point.

Twitching for us in Quebec has usually been fraught with disappointment but we went anyway. After ten minutes and having picked out a winter adult Little Gull the Sabs arrived. It fed at range but gave scope views and I also took a few shots of the water. If you look closely you can see an obscure blob with white triangles in the wings, that is the gull.

Sabine’s is my favourite gull, just pipping Ross’s to the title. This little beauty was Quebec tick 300 so extra special. The year list is at 263, I still need a mockingbird, Carolina Wren and Tufted Titmouse but I still have three months left to find them so all is not lost.


Below a few miscellaneous shots, no apologies for the record shots. 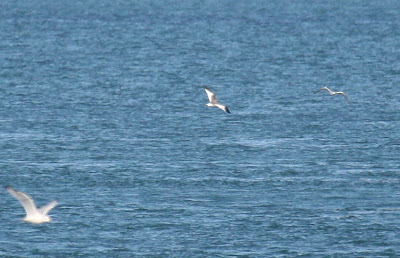 The record shot of the Sabine's Gull and the original below. Feel free to click on it, the image is still lousy though. 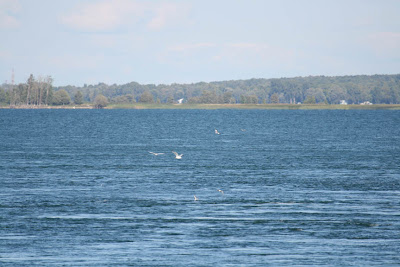 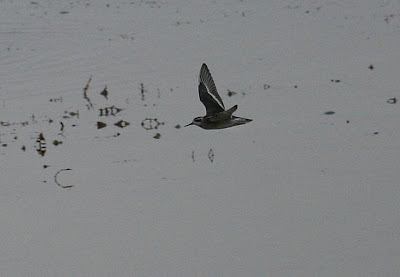 I'll put all of the really terrible photos at the front although, to be honest, they don't improve any. This is a flight shot of the Red-Necked Phalarope on the Chemin de l'Anse, the light was shocking. 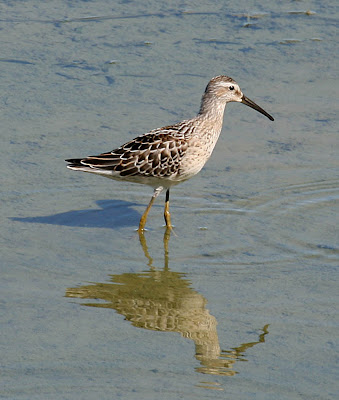 Stilt Sandpiper from the l'Anse, probably up to six different birds so far. 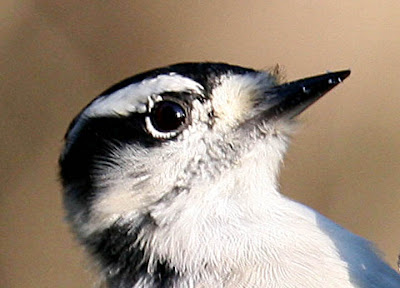 Woodpecker heads, you don't need me to tell you which species is which. 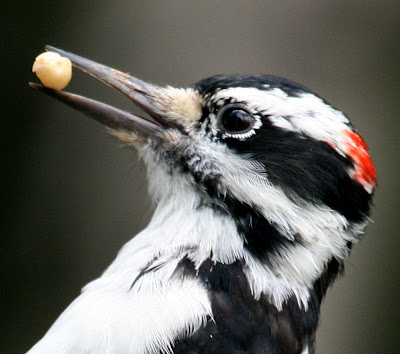 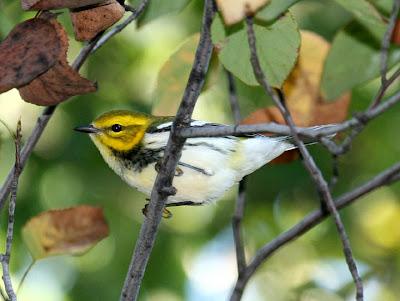 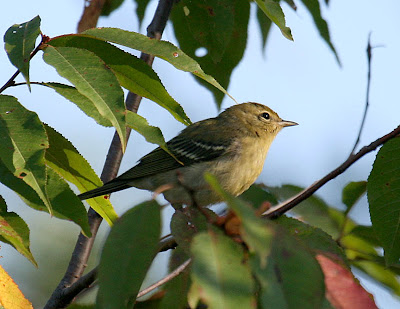 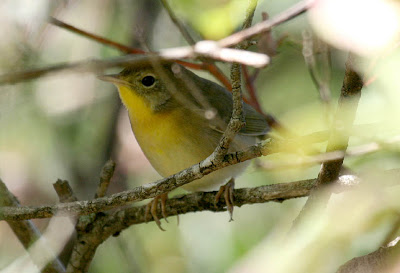 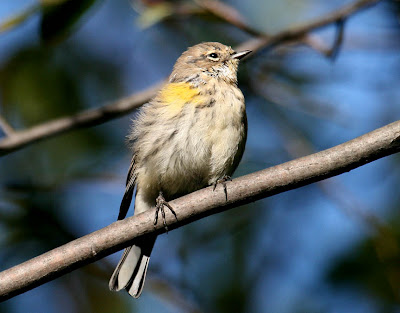 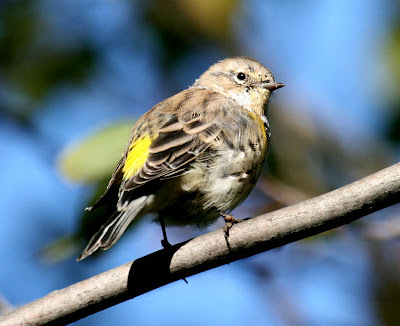 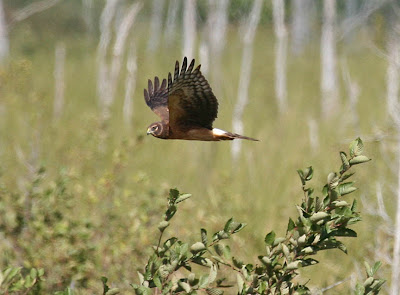 I've not bothered captioning the last few photographs as they are not too hard to ID (well onemight be tricky) If you don't know what they are, get your book out, its good practice. Just a hint, the last one is not a warbler.
Posted by QCdays at 7:20 PM 1 comment:

Hoping to catch up with a few species still absent from the year list, we took a five day break birding the Charlevoix-Manicougan area of the St-Lawrence river. Based in Tadoussac, the overpriced little tourist trap at the mouth of the Saguenay River, we ventured mostly north as far as Portneuf sur Mer, just short of Forestville.

Prime targets were Jaegers, any jaegers and also Red Knot, both Quebec ticks. Year birds also included a few of the shorebirds that have yet to grace Vaudreuil Bay and species like American Pipit and Orange-crowned Warbler which I just have not bumped into yet.

Our trip lists always start at dawn on the day of the trips so our garden birds were duly noted and, rather ironically, the first fall warblers had arrived. Five minutes on the front stoop produced two Blackburnian and single Black & White, Yellow-rumped and Magnolia Warblers. A Red-eyed Vireo gleaned the Birch trees and a family of Baltimore Orioles played chase around the garden.

Once underway we made various stops en-route to our first night location of St-Simeon. We checked out the l’Anse at Vaudreuil seeing the commoner shorebirds plus two Pectoral Sandpipers then Lac St-Pierre where five Ospreys, two American Golden Plovers and a nice flock of Black-bellied Plovers gave the trip list a good start.

We pressed on to St-Irenee, a good, back creaking distance to drive in an Echo, the trip only enlivened by a white stretch limo pulling out in front of us and crawling the last 20km or so to St-Irenee causing a 5km traffic tailback. The roads gave no chance to overtake and none of the ten cars between us and the limo seemed so inclined. We guessed that it was either yet another ancient Quebec driver with a car too big for them or, somebody had died and this was the funeral cortege. This has always confused me, why do they drive so slowly when you are dead. You don’t care too much, you are already surfing the astral plains (or scoping the astral wetlands, depends on your interests). The people attending would rather get the whole thing over with as soon as possible so they would appreciate a little more haste. The clergy would like to press on as it cuts into their communion wine and choirboy time, so let us all agree now, toe down, in the hole or up the chimney with the stiff, off to the bar, mine’s a pint.

The luxury that is Internet access is somewhat limited in some areas. Our first night motel had access and so we were very interested to note that a Tricoloured Heron had been seen at Tadoussac that day. Dense sea (well river) mist shrouded St-Simeon at dawn. A short sweep of the local shrubs produced a couple of Orange-crowned Warblers in with a few Nashvilles and Tennessees. A swift breakfast (that is a quick breakfast, we didn’t eat any swifts) and we were on the way to Tadoussac, a 30-minute drive or so. After ten kilometres the sun broke through, the shroud lifted and the day looked like it might be viable after all. Predictably the heron had gone, possibly to Trois-Riviere and the site of the oldest industrial building in Quebec, perhaps more of that later.

Our accommodation at Tadoussac was a chalet at the Domaine des Dunes, pre-booked, not cheap but nice and we could self cater. We took off for Les Escoumins to try for a Little Gull. When we arrived the sky was full of Bonaparte’s Gulls hawking insects, it took an hour and a half to find a Little Gull, just the one, although we were entertained by the Common Nighthawks that had joined in to show the gulls how to hawk properly.

Moving on to Longue Rive and a high tide so lots of shorebirds. An advantage here is that the shorebirds are pushed up to the road; a disadvantage is that the road houses thunderous trucks, roughly one every three minutes, it’s disconcerting. We soon picked out Red Knot from the mass, four birds picking busily away, they were my 299th Quebec bird and my 2,000,001st-4th Red Knot in the World! (approx). We dallied a while then birded along the shore ending up at some bridge thing with a path. Rocks at the river mouth had a few shorebirds, notably a Hudsonian Whimbrel and a few of each yellowlegs. Later a small group of Short-billed Dowitchers pitched in and I messed around taking a few photos.

Day three and we took a whale trip. I had birded the dunes at Tadoussac first thing seeing five Sharp-shinned Hawks in the first 20 seconds and not much else after. The whale trip was ok, not one of our best, we saw a few Minke's a few Fin Whales and the odd, distant Beluga. The wind was stiff and cold and there were very few seabirds except Black-legged Kittiwakes and Bonaparte’s Gulls. Later that day we did a trip to see Black Bears, see the previous posting.

Day four and off to Portneuf sur Mer. Nowhere in the Tadoussac area seemed to have room on their wireless Internet for us to look at the Quebec rare bird site so we had to wait until reaching an establishment of a popular hotel chain before we could log on. One day and fairly soon, wireless Internet will be free and everywhere. No reports were in for our area but the previously mentioned Trois-Riviere site had the Tricoloured, something we could try for on the way home.

We walked out at Portneuf along the spit. For UK birders its like walking to Blakeney Point, enough said. The sea (river but it is wider than the channel) held Gannets and flocks of Common Terns, all three scoters and passing Merlins seemed everywhere. The tide was rising so we decided to check out a picnic site just to the south where birds would gather, and we hoped to do another whale trip out of Portneuf as ‘thar be blues’ (translation.. there are Blue Whales off Portneuf) Unfortunately the constant gale remained constant so we contented ourselves with the shorebird roost and general mooching.

Day five was spent travelling back. Yes we tried at Trois-Riviere for the Tricoloured, no we didn’t see it, nor did anyone else as far as we know.

That was it, no jaegers but Red Knot and nine other year ticks making the list 262. The trip list came in at 115 and the month total 157.


Below a few photos of varying quality. 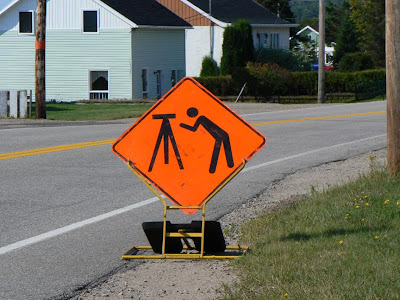 Despite the thoughtful `Beware of the birders`roadside warnings installed by the local council, trucks still thunder along the Longue Rive. 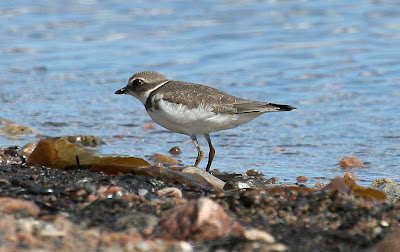 A couple of views of Semipalmated Plover 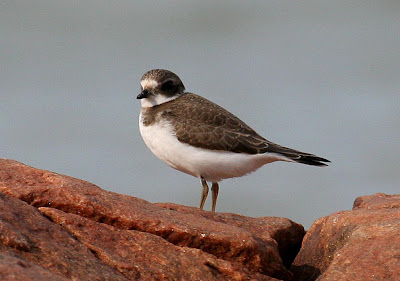 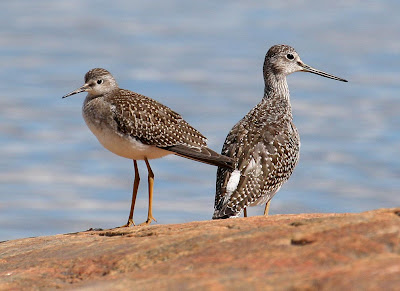 You are now wondering how you ever confused the two yellowlegs! 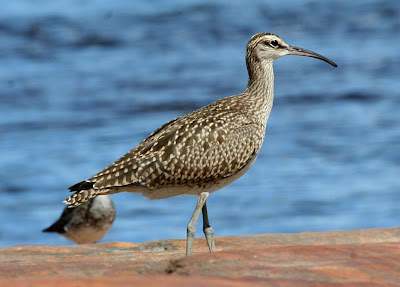 Hudsonian Whimbrel, a recent split by all who are sane. 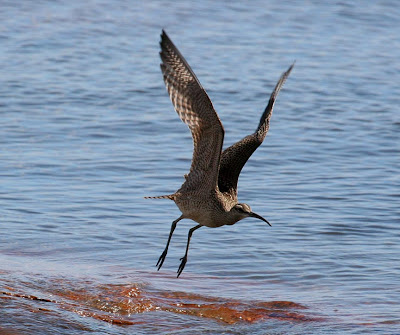 This view shows one of the reasons for the split from Eurasian Whimbrel, the bird is in North America! Pity you can`t see the all dark rump properly. 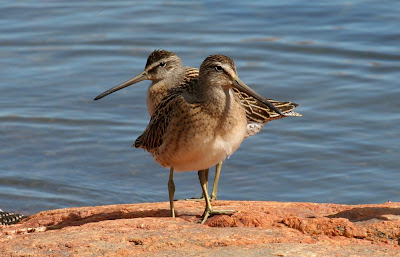 Two Short-billed Dowitchers although you could easily mistake the bird in the foreground as a Long-billed, its not though. 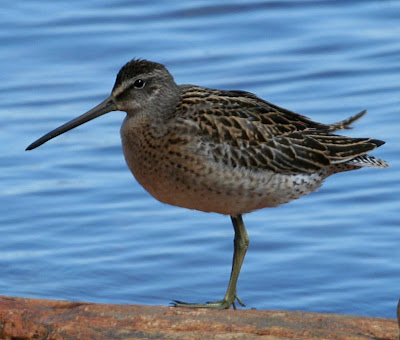 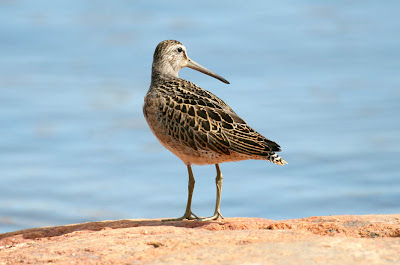 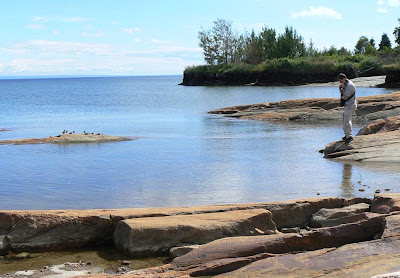 By cunningly pretending to be a slightly plumper dowitcher I was able get the group to accept me as one of their own and take a few photos. Wide angle shot courtesty of Sandra Dennis. 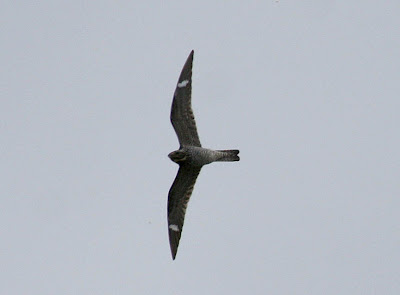 A couple of record shots of Common Nighthawks, they were very fast (excuse for bad photos) and chose an area over Les Escoumins which contained the highest density of overhead wires found anywhere in Quebec. 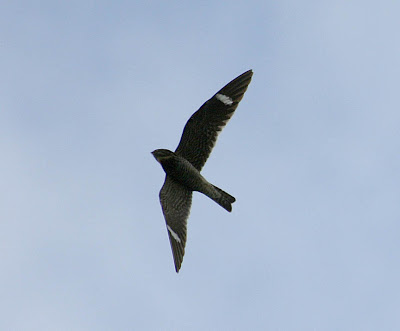 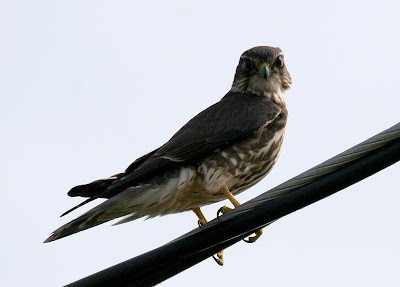 A Merlin, having just devoured a dragonfly, in the fashion of a Hobby or Red-footed Falcon, never seen them do that before. 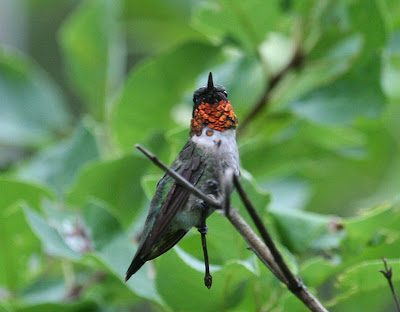 I like hummers so, if I photograph one, you are going to see it. 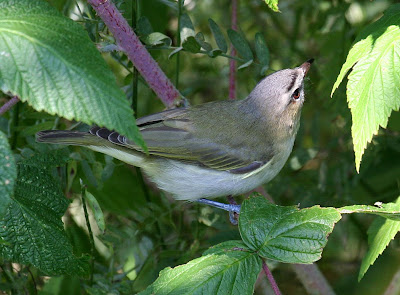 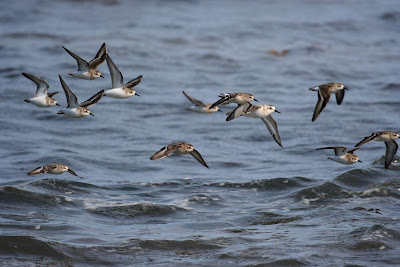 Shorebird fly past at Pointe-Boisvert, can you spot the Western Sandpiper. 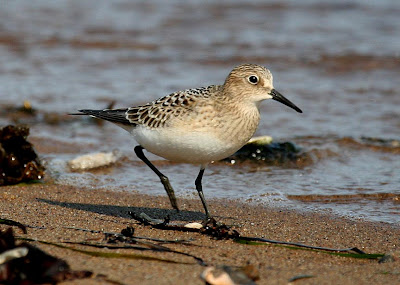 Last but not least (every pun intended) a Baird`s Sandpiper, one of the 21 shorebird species seen on the trip.
Posted by QCdays at 7:17 AM No comments: