Antisana-Papallacta and down to Guango Lodge 25-26 November 2007.

First a few details and tips about such a trip and just to say that this is not meant to be a trip report, just a few comments and photos.

The birding venue for the first couple of days was at altitude, this has a deleterious effect, even on someone as obviously fit as me. The result of the altitude is difficulty breathing and a slight disorientation which results in some of the longer winded bird names being mispronounced i.e. Rufous-crowned Tody-Flycatcher might be reduced to “what is this”. Also the sheer volume of new species means that when your head is as full of seventies pop music, football and other utterly useless information as mine is, then you have to make some hard disc space for the new stuff. To that end a load of the pop music was deleted so please don’t rely on me in a pub quiz answering such questions as “what are Bangles’ three greatest hits”. That information has been cast to the eternal flame and it will have to be a manic Monday before I walk like and Egyptian again.

Now that I have lost your attention I’ll introduce the group for the first part of the trip. Our leader, henceforth known as ‘Boss’ was Scott Olmstead. Scott is as good a field birder as I have ever met (and I’ve met quite a few). Sharp ears and eyes, enthusiasm and energy and a diplomacy beyond his estimated 24 years, he also almost has a beard, one of those young people beards reminiscent of the growth seen in popular 70s mag ‘Health and Efficiency’ some of you will get that joke, some definitely won’t.

Our fellow group member was Jim Scarff a resident of California. His performance at altitude was impressive given a severe bout of bronchitis. He was on part two of his Ecuador trip having been out west in part one. Our driver was Louis on his first real ‘Tropical Birding’ excursion, what a nice guy he was, patient, attentive and we really enjoyed his company.

We pushed out of Quito early and climbed up to Antisana in the Andes birding as we went. We saw lots including the much desired Andean Condor, a Brook-bond bird (I’ll explain later).

Our route took us onto the high paramo above the tree line and eventually to a large and windy lake. The birding was pretty exciting given that most of the species were new. The day’s total was 70 species, the highlights were condors, Andean Gulls (sad I know) and my bird of the day, a Curve-billed Tinamou, my first tinamou of any kind. The weather was kind with just a short shower wetting the van rather than us, we ended the day at Guango Lodge and marvelled at the hummingbirds zooming around the many feeders, those Sword-billeds are a joke right!

After a comfortable night in the cosy lodge we birded the local hill and then went back up high to try to dig out another much wanted species, Rufous-bellied Seedsnipe. The seedsnipe eluded us despite much energetic bog bouncing by the Boss, but other stuff was seen, again most of it new, and when we pulled into Cabanas San Isidro for three nights we had seen 80 species for the day and, more importantly, we could breath again 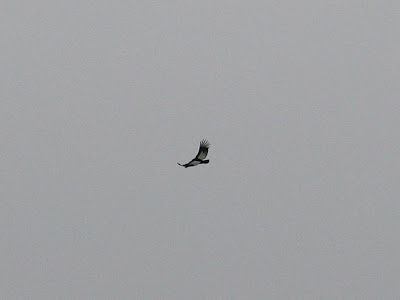 Andean Condor, one of about five seen. Big birds but this one was over a mile away. I mentioned that it is a Brook-bond bird, that means it is one of the species depicted on cards given free with tea when I was a kid. I collected them all and now I'd like to see them all. 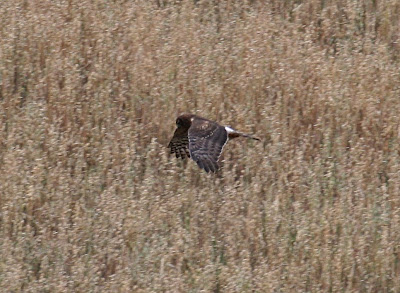 Cinereous Harrier, a tick for the Boss. It looks like a female Northern Harrier but with a Spanish accent. We were very excited, we saw two more so I put them down as 'common' in my notebook! 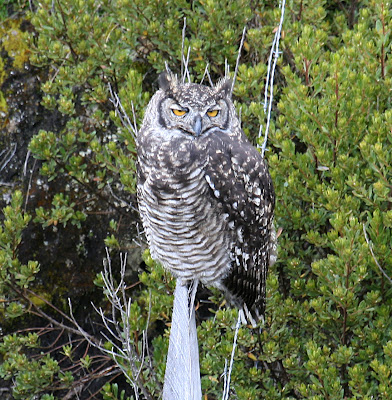 An unexpected sight, sitting as it was in the middle of the barren paramo. This Great Horned Owl could have tried harder to be Megallenic, split them all is what I say. 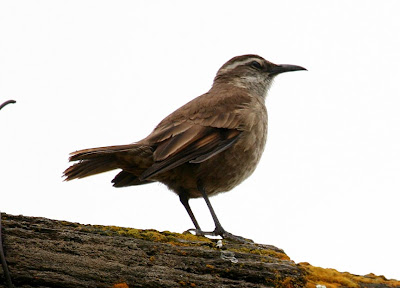 A Stout-billed Cinclodes, common at altitude, you can see the stout-bill here but the cinclodes are well hidden by the feathers. 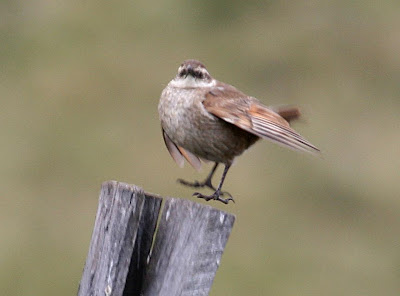 Its hard taking their photos when they have hiccups. 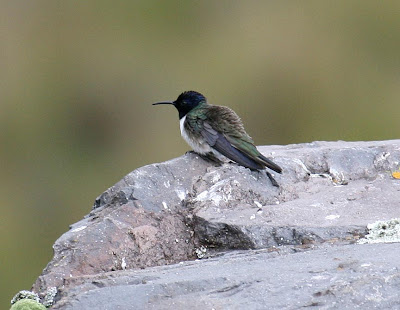 Ecuadorian Hillstar, a male and one of the 50 (yes 50) species of hummingbird seen on the trip. 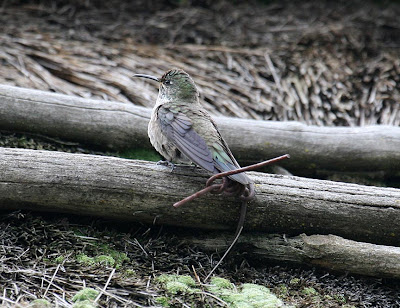 And the missus, they were breeding under the eves of an abandoned hut. 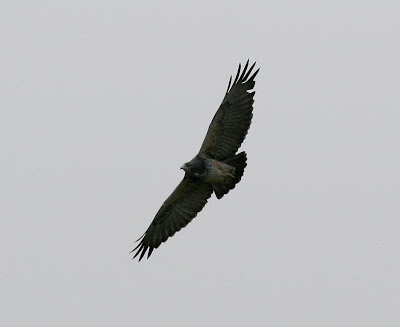 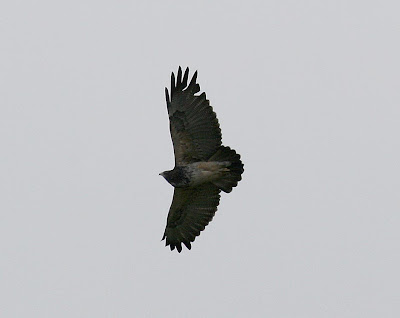 Black-chested Buzzard-Eagle. In shape like a Bateleur, a very imposing hawk. 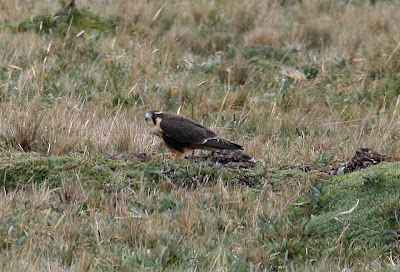 Aplomado Falcon, just one seen up on the paramo but great views. For Europeans this species reminds me of a heavy Eleonora's Falcon. 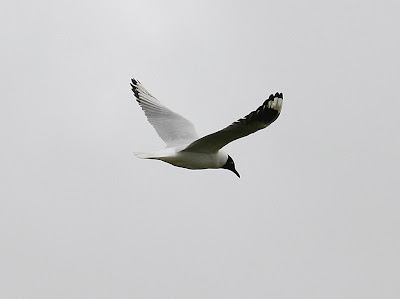 A good sized flock of Andean Gulls were around at Antisana but the preoccupation with everything else meant that I only managed one hasty snap. 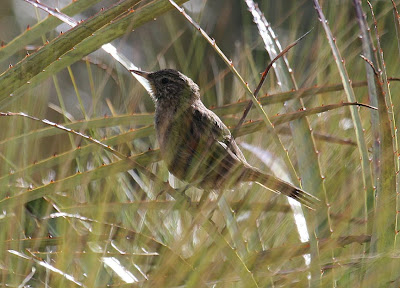 Streak-backed Canestero, this grassland skulker prompted us to walk up a steepish incline over a muddy field to get views. It turned out to be a serendipetous choice as a Curve-billed Tinamou, previously undetected in the field, bolted to the vegetation nearby giving great views. 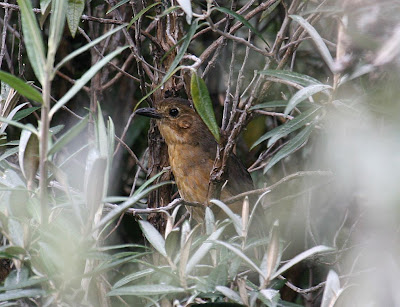 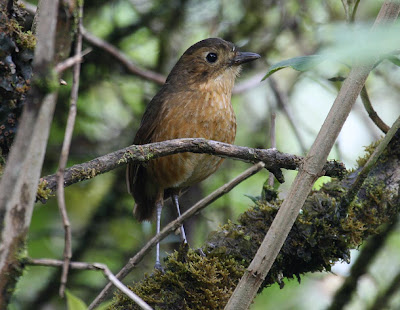 Tawny Antpitta's are,or where, the easiest of this group to see. We heard them frequently but only managed to get views of a couple. The first called from a bush, peeping out at us trying to figure out where the playback was coming from. The second I imitated and drew it from its song perch until it was within reasonable range. 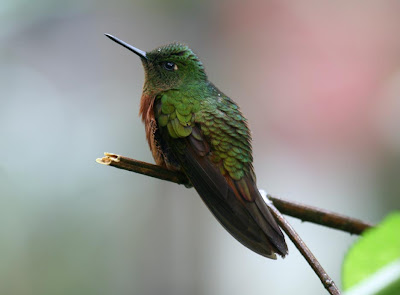 Once we got to Guango Lodge the focus changed to hummers. The light was 'challenging' but I managed a few shots. This is a Chestnut-bellied Coronet. 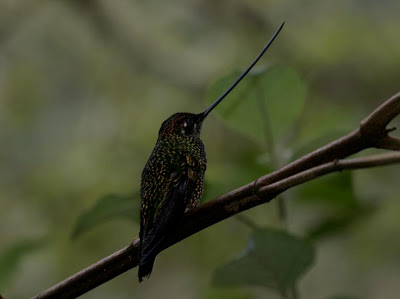 The Sword-billed Hummingbird is surely one of the creaters' apprentice peices. They have to be seen to be believed, so disproportionate is the bill. They do, however, retain a certain grace and when you see some of the flora you realise that the design is pretty specific. 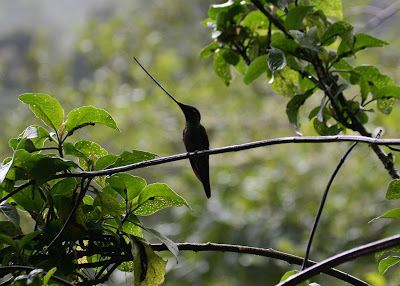 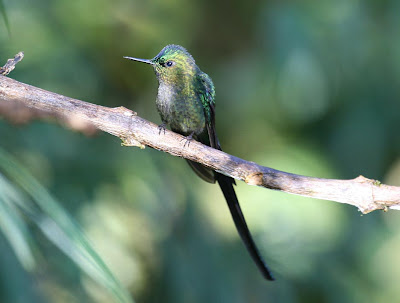 A Long-tailed Sylph, this design is a little less obvious but impressive nevertherless.

Next stop San Isidro.
Posted by QCdays at 8:32 AM