With the less than exciting July (in terms of avian delights) now behind us its time to look forwards to the steady movement south of some of the species that eluded me in spring.

I seem to have many gaps on the year list that I had expected to have filled by now, particularly amongst the shorebirds. I’m hoping that water levels on the Lake of Two Mountains (well, hillocks really) and that my shorebird site starts to produce. The water levels at St-Lazare sand pits seem very unlikely to drop although another pit to the west of the main area has promise, provided I can get there before others disturb the birds.

I’m intending to get along the Charlevoix and Manicougan sections of the St-Lawrence, not just in the hope of a jaeger but also to see a few Whales perhaps. From mid September the observatory at Tadoussac just might give me Boreal Owl and American Three-toed Woodpecker and I hope to finally crack a Purple Sandpiper.

Since the last posting here I’ve not done a great deal other than enjoy the local birds and make inroads into the local dragonfly and butterfly populations in terms of identification and familiarization. This means I have taken very few photos of late, other than insects, so not much to browse below, in fact, if you know any blogs that offer views of paint drying I’d go and check them out now.

Finally there is a typically vague report of a Red-headed Woodpecker on the Coteau du Lac Golf Course. Looks like I’ll have to dust off my clubs and play my first round of Canadian Golf while taking a more than passing interest in the tree obstacles on course. 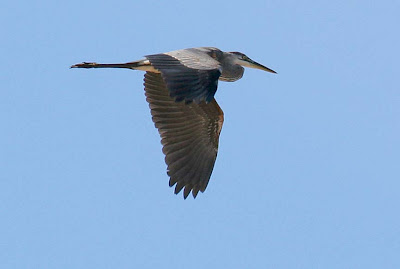 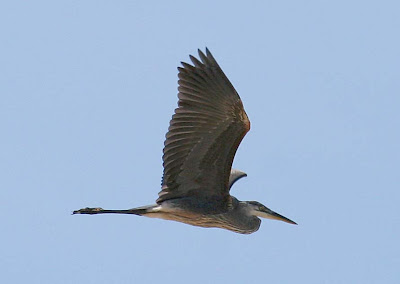 A couple of views of a Great Blue Heron flying, but then you knew that already eh! 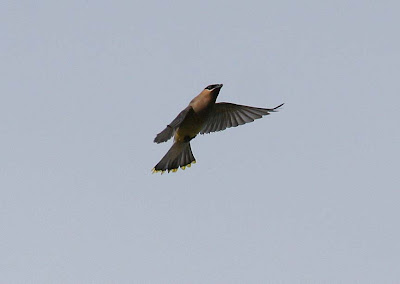 Cedar Waxwing family groups have been conspicuous, taking time from gorging on berries to gorge on flies. 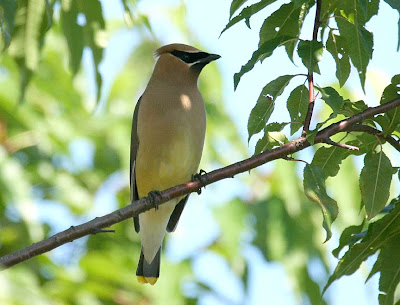 And now, as meagre compensation for the lack of pretty birds to look at, here is a just for fun photo quiz. What are the species shown? 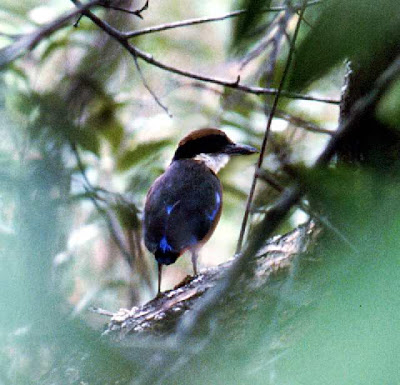 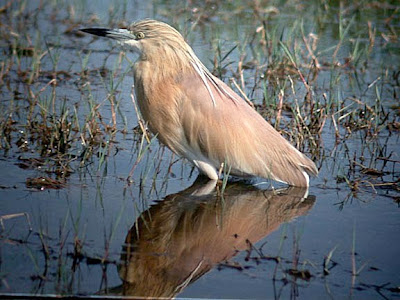 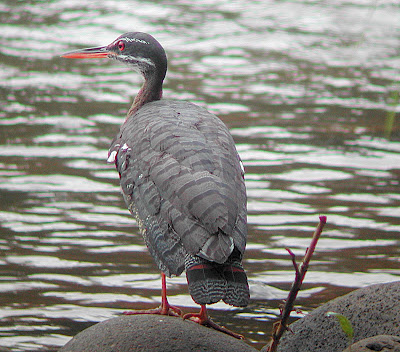 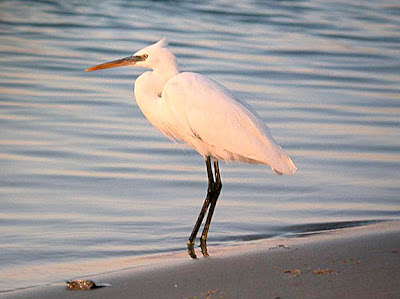 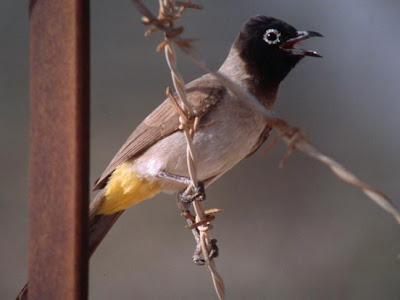 Now that we have slipped past the longest day, the half way point in the year list, the steady run in to winter is upon us! Seriously though, the breeding season is at its zenith and shorebirds are appearing at various Montréal sites. Before long the trees will buzz with southward bound passerines, stocking up for a journey that many will not complete.

I always thought that July would be on the slow side and so it has proved, however, one bright period was a recent trip to Lac St-Jean and then along the north shore south from Tadoussac. It was a trip of 2700km but included one long sought after lifer and one species I really should have seen in Quebec before now.

With some pretty good directions via Ornitho-Quebec we set off towards Lac St-Jean for another crack at Connecticut Warbler. Other possibilities were Le Conte’s Sparrow and Nelson’s Sharp-tailed Sparrow, especially as the former was present at Métabetchouan in what sounded like an easy location. Generally the skulking grassland sparrows are never easy but other observers had recommended being on-site at dawn to avoid the road noise masking the Le Conte’s song and it seemed that we might stand a chance.

We arrived at Roberval late in the afternoon and spent most of the rest of the day not seeing any of the Northern Mockingbirds reported for the area. We dropped down to Metabetchouan to check out the field just in time to see the farmer finish his final cut!

Up reasonably early the next day we arrived at Normandin in good time and followed the directions. Perhaps an indicator of the day was a male Spruce Grouse which flew up beside the car, the wing blatter enhanced by the open windows and the fact it was about three feet away when it burst forth. Next we found the unmarked turn onto Chemin Murdock, essentially a sandy track through the forest. As we progressed we passed another birder who told us that the “paruline et ici” and sure enough there it was singing away.

The bird sang repeatedly for five to ten minutes in bursts then took a short break before resuming. It sounded very close, perhaps 15m into the mixed forest. The visibility was reasonable so we worked every branch from the road and totally failed to see anything. At times it seemed to have moved off into the denser depths, then it would seem to be within touching distance, it was very frustrating. A large pine about 15m into the forest was obscuring the view so I ventured in and used it as cover. It gave a much better view of a stand of birch so I just kept scanning. Eventually I picked out a shape in a Birch with the naked eye and there it was, a singing male Connecticut Warbler. I enjoyed it for a while, made a mental note of the exact location in relation to the road and then went back to try to scope it. The bird was at least 75m further away than I had initially thought and try as I might, I just could not get it in the scope. We decided against going back in, the time was getting on and the bird singing less. It had been the ideal observation of a tricky species, located by stealth, undisturbed but thoroughly enjoyed.

Next we decided to drive to Tadoussac via Métabetchouan and Saint-Fulgence. It was late in the day and the strong winds would carry any unlikely song off down the Saguenay and so it proved. The Saguenay was remarkably birdless, vast areas of river sand banks and muddy edges absolutely devoid of birds.

Tadoussac appeared to be entirely populated by people with nose rings and tattoos so we pushed off to St-Simeon, birding along the way. The next day we pushed on, pausing at Malbaie for breakfast and to ensure that, as usual, none of Québec’s rarer gulls were present. Our destination was Baie St-Paul and Nelson’s Sharp-tailed Sparrow habitat, surely they don’t mow that! To cut this post short, the sparrows were there but very hard to see. At least three sang, one was seen fairly well and another glimpsed a couple of times. Satisfied we went home thankfully not slowed down by any Canada Day (for it was that day) celebrations in Québec City.

Since then I’ve been out a few times adding just Caspian Tern to the year list which is now at 244. By late July some of the shorebirds I’ve not seen yet should be trickling through, meanwhile I’ll just enjoy the insects, photos of which will appear on the relevant blogs as per the links (eventually).
Obviously none of the skulky species featured here were photographed so below are just a few of the random images from the period. 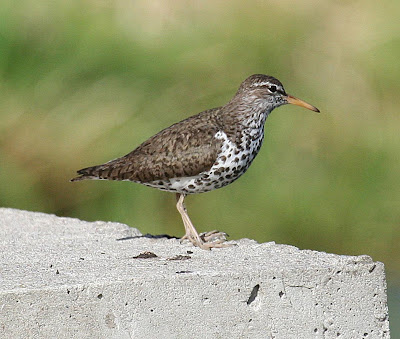 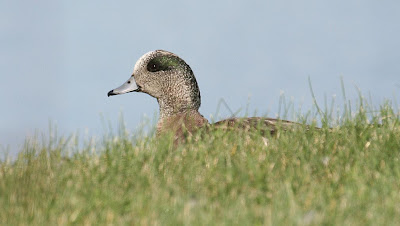 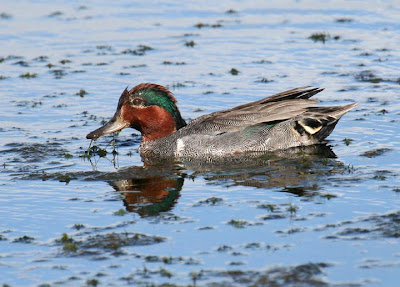 Male Green-winged Teal just about to undergo a body moult. 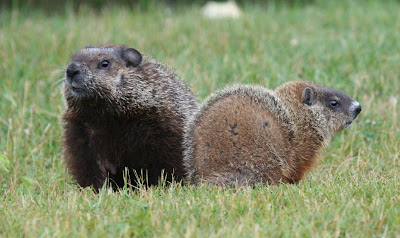 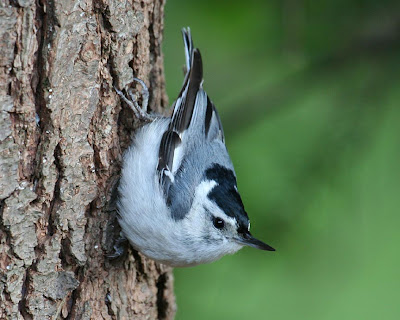 White-breasted Nuthatch, they seem to be much commoner this year. 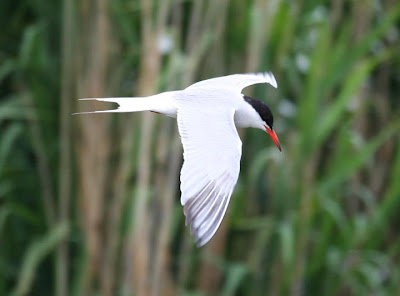 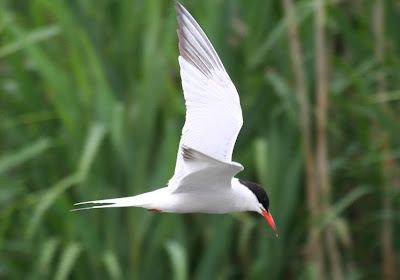 Common Tern, told you I didn't have many bird photos! 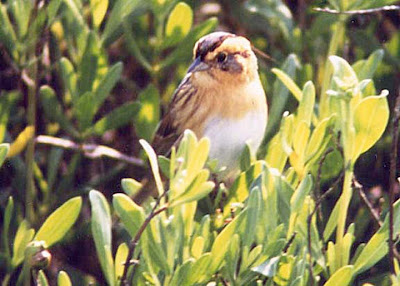 Posted by QCdays at 4:51 PM No comments: