To Antpitta or not to Antpitta

We had pre-arranged with Tropical Birding for a trip on the Friday to see the Antpittas at Angel Paz’s farm. When the Tropical Birding guide Olger arrived at Tandayapa we discussed alternatives, our trip list was already quite spectacular, I fancied adding a few more. We agreed on a 4.30 start and Olger was to put together an ad-hoc itinerary whereby we would bird some of the Western Slope and enjoy ‘a good days general birding’

Driving out through the early fog we descended onto a dirt road heavily used by trucks, seemingly moving a hill from one place to another. Birds (and ticks, that’s lifers not insect pests) were everywhere and Olger was quick to locate all of the callers, singers and skulkers. A Brown Wood-rail was coaxed out of the undergrowth and gave a virtuoso performance of its amazing song. If you want to hear it, Google Xeno-canto, a splendid repository of bird songs and calls from the Neotropics.

We moved on to Rio Silanche then to Milpe and both were just great places to bird. The latter site could do with a full day alone as everywhere we went we found birds. One downside of the day was that Sandra got a migraine and so preferred to remain in the car. The fact that she missed so many birds is reason enough to go back and spend more time in the west, back up reasons are the gaps where Moss-backed Tanager, Scaled Fruiteater and Toucan Barbet are on our Ecuador lists.

The two preserves we birded had an entrance fee of $6 and the permit was good for both sites, ridiculously cheap. At Rio Silanche I even climbed up to observation tower with barely a spatter although the canopy birds must have known we were coming as they had vamoosed. Down below a Black-headed Antthrush actually strutted its stuff in a gap in the vegetation and some Rufous-fronted Wood-Quails bolted for cover when we approached. At Milpe we found two good flocks and worked both seeing some great birds. In the woods the bizarre Club-winged Manakins ‘meeped’ their mechanical sound from many perches.

By late afternoon the light was going as clouds began to thicken and so we made our way back to Tandayapa. As a finale we birded the old Mindo road finding Plate-billed Mountain Toucan and even getting a Spillman’s Tapaculo to show itself. Back at the lodge Sandra hit the sack and I hit the hummer feeders, we were on for a good day list.

All but three of the regulars showed bringing the ‘good days general birding’ list to 175. Thanks are due to Olger for excellent guiding and to the driver, I don’t know is name so I’ll call him Clint, who left Sandra to recover in the car while he waited for us.
I managed to grab a few photos of variable quality. The next post will be animals and scenery and there will endeth the blogging of our Ecuador trip. 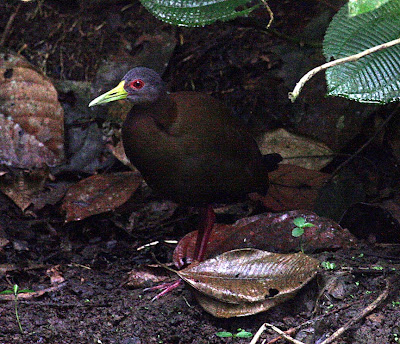 Brown Wood-rail. It was dark! 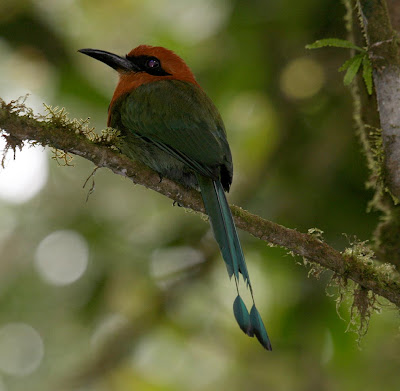 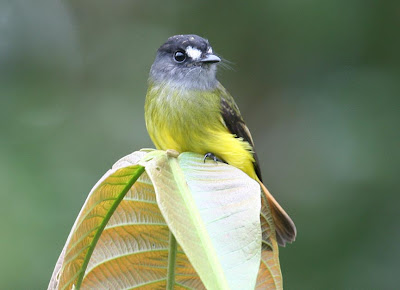 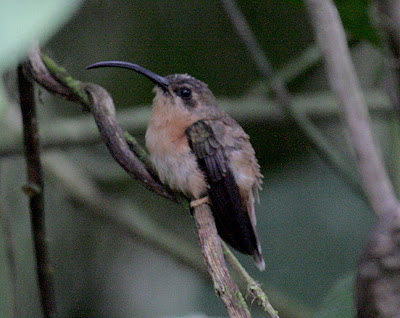 This interesting hermit was at Rio Silanche, it had us stumped at the time but having pored over the avalaible literature, I came up with Bronzy Hermit, any other thoughts would be appreciated. 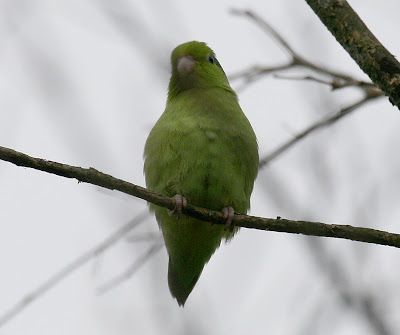 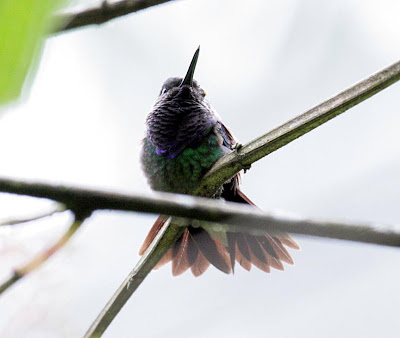 Purple-chested Hummingbird, although according to HBW the tail should be dark. 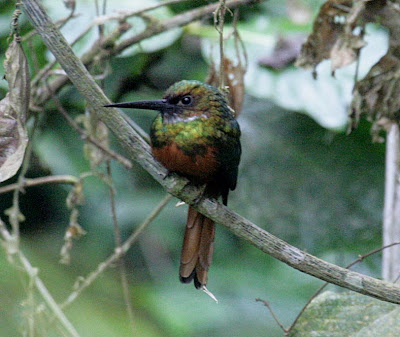 Rufous-tailed Jacamar, our fifth jacamar species for the trip. 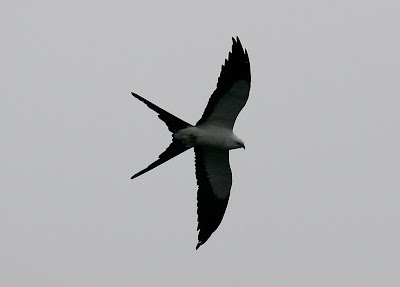 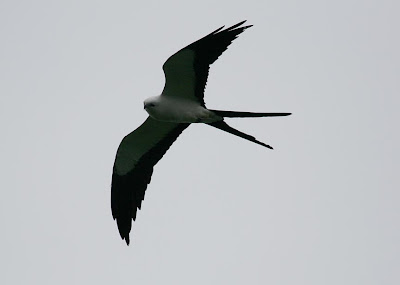 Swallow-tailed Kite, a small flock entertained us at Rio Silanche.
Posted by QCdays at 3:58 PM