With the big year opportunities running out, the appearance of a Townsend’s Solitaire at Boucherville and a Carolina Wren that was not in someone’s garden was enough to tempt us to wander out to east Montreal. The wren had been seen around the feeders in part of the Montreal Botanical Gardens. The solitaire was found at one of the spots we always enjoy visiting, the Parc de la Freyer at Boucherville.

The day was bright but a brisk and decidedly cool breeze was enough to encourage us to don hat and gloves, good training for the forthcoming Andean exercise where it will almost certainly be windy and cool! It won’t come as a surprise to anyone to know that we saw neither target, its been that sort of year. Both had last been reported on November 15th but that means nothing here as observer coverage is not exactly at saturation point. As it happened we had a very nice day, especially when we got to Boucherville, and we saw some nice birds too.

At the Botanical Gardens we saw a few birds, House Finches, Dark-eyed Juncos and an alert Sharp-shinned Hawk intent on snacking. I managed a few snaps of the sharpie, they might have been better had a couple out strolling not marched up behind me as I stalked it. It was just bad luck that they had to walk the path where I was, we were the only people in the Alpine Garden and any of the seven or so other paths were available but no, they had to walk mine for the few minutes I needed it undisturbed!

At the Parc de la Freyer we hit birds straight away, a Long-eared Owl was ensconced in the top of a tangle and gave partial and entirely normal views for this species, we nipped back later when the admirers had moved on and took a few fuzzy shots. Further on and lots of calling indicated the fruit munchers` location, American Robins were in abundance along with some ridiculously tame Pine Grosbeaks. The grosbeaks were patiently destroying the crab apples and berries, oblivious to the clicks of the many cameras pointing their direction. As always seems to be the case with these birds, they may be close but they always have a face full of mush to detract slightly from their photogenicity.

In a more woody part of the park a Barred Owl was regretting choosing to roost in a fruit tree and the robins were giving it severe grief. Our presence, though tolerated, was just one more inconvenience associated with the task of avoiding the irate mobbing masses and killing something big for tea. The owl later chose to slip into a less obvious spot for some R & R, using its cunning and camouflage to hide behind a thin branch thus avoiding detection (see below).

It is a pity that the Parc de la Freyer is so far away, a 170KM round trip from home, I’m sure there must be something as attractive to birds out west here but as yet I haven’t found it. Visiting the parc has always been fruitful birdwise and the atmosphere is always good, the people we have met there are always very friendly and helpful.

Below are a few shots. 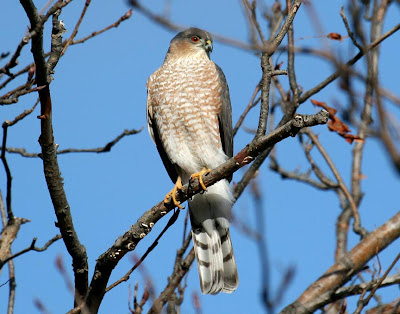 Just another 30 seconds and I would have been in place to avoid the branch across the sharpie's head, merci! 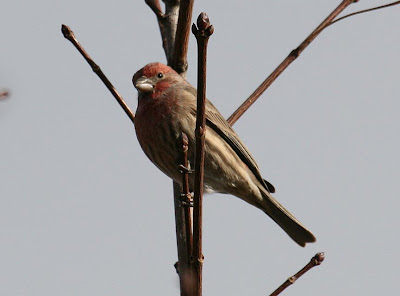 Male House Finch, they are not very common out where I live so it was nice to see a few healthy flocks. 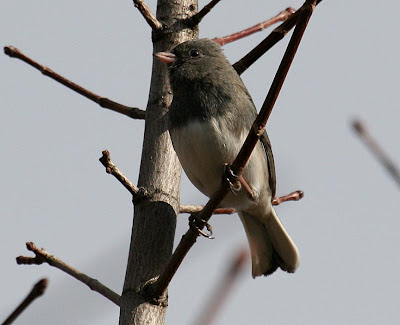 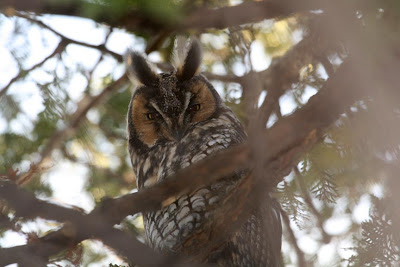 Are you a man or a mouse, I have to ask you understand. 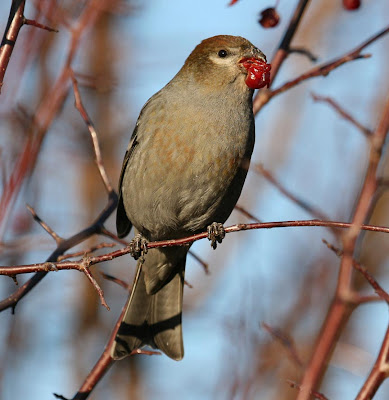 Female/immature Pine Grosbeak, they outnumber the males about 4:1. 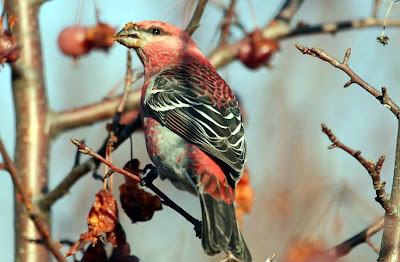 Male Pine Grosbeak. called a grossbeak either because their bills are large or that they are always 'gross' 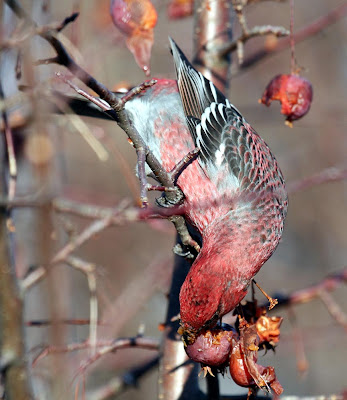 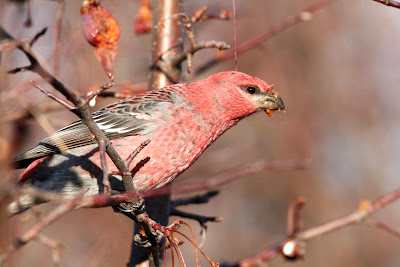 Almost decent, just needs a once over with a wet wipe. 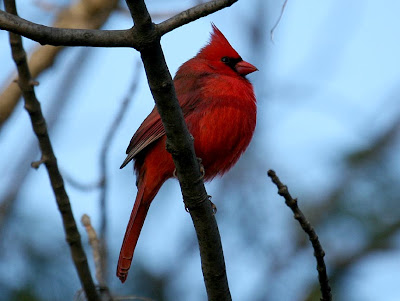 They just look so out of place, surely something tropical? 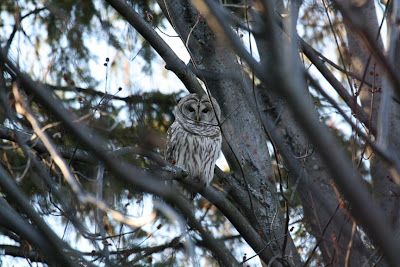 The Barred Owl, virtually invisible thanks to its subtle plumage and careful positioning! 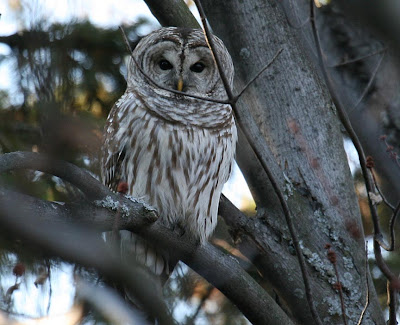 For those of you struggling to spot the owl in the photo above here is a close up, still tricky though as the branch partially obscures it, or am I just making excuses for a bad shot?
Posted by QCdays at 5:20 PM No comments:

A nip in the air

With the clocks going back birding is now pretty much limited to weekends, here in Canada it was a week later than Europe to match with the USA. Perhaps with the strength of the Loony (Canadian Dollar) against the US Dollar we should have demanded a change of an hour and ten minutes, a little political joke there. Interestingly, despite the Loony rising by 25% against the US Dollar in the past six months, prices of imported goods from the USA have not dropped, yet another way for the thieves of banking and commerce to rob you.

Back to the birding and unless we were willing to drive over to Abitibi to stand in someone’s yard to look for a Painted Bunting or the same distance but the opposite way to Rimouski, to stand in someone’s yard to look for a Blue Grosbeak, our options were slim. Purple Sandpipers have returned to Tadoussac, good, we might eventually, but the thoughts of a long drive after another long week was not tempting and so birding was to be a strictly local affair. This turned out to be OK and the ‘pits’ (St-Lazare sand pits) had Northern Shrike and Bohemian Waxwing to enjoy, plus lots of Canada Geese to pick through for the inevitable Cackling Goose.

In the garden a nice pair of visitors were a pair of Evening Grosbeaks. Hopefully they will stick around and the male will get his chance to pose for the camera. Another visitor that is becoming increasing regular is Pileated Wodpecker. As an experiment I moved a feeder to just outside the living room window. The regulars soon took to it and the endless procession of Black-capped Chickadees is a big improvement on Canadian TV (except for the excellent Corner Gas). The Pileateds soon found it and bound in regularly to make short work of the suet blocks. Having this beast of a woodpecker less than four feet away from you is pretty memorable, I wonder if the Ivory-billed Woodpecker searchers have tried suet blocks. 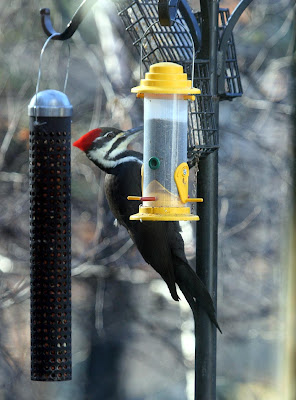 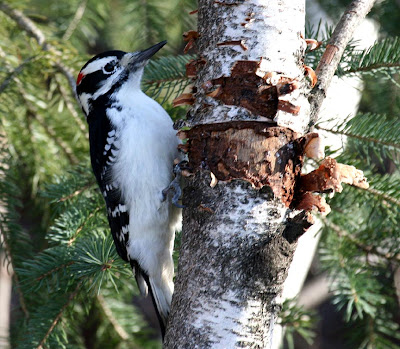 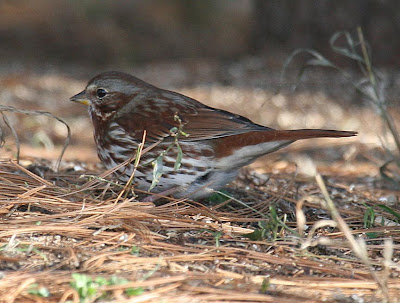 A late Fox Sparrow, not dead you understand, just late in the season. 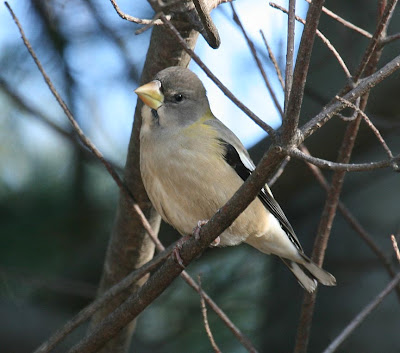 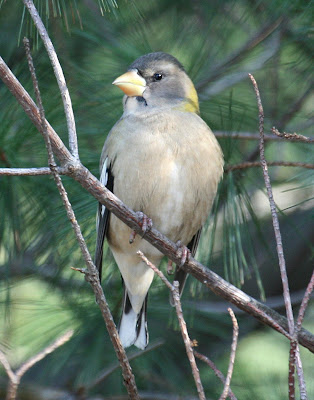 Mme Evening Grosbeak, the male was a little coy but its nothing to carp on about.
Posted by QCdays at 5:55 PM No comments:

In an effort to fill the last duck gap in the year list, we went off to Chambly in the hope of securing the Canvasback that had been there a few days. As ever this required a trek across Montreal but traffic was light so it was pretty easy. The duck was there, sat in the middle of the river. A bonus was male Barrow’s Goldeneye with it.

Neither bird came closer than 150m so below are just record shots. The Canvasback was 266 for the year, it may well turn out to be the last addition or am I just being pessimistic! 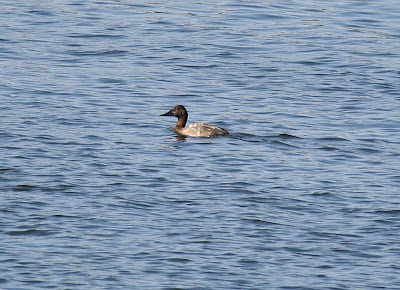 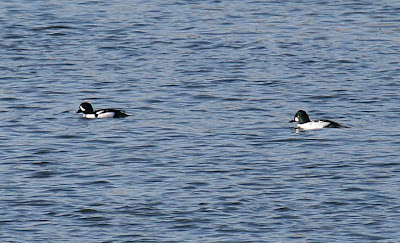 Posted by QCdays at 2:50 PM No comments: